"My membership and active participation in SME led to my first full time position in the mining industry, and subsequently led to my current position. Membership continues to benefit me through the professional contacts that I have made and the information I acquire." 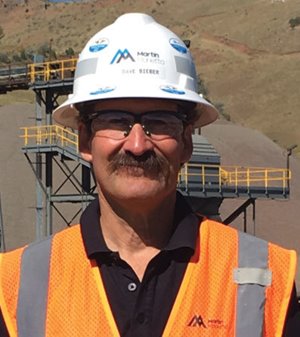 Give us your background in the industry. What led you to pursue your profession?

My dad worked as a mining geologist/engineer among his many positions, and we had several very close family friends who were mining geologists. However, I started my professional career in oil and gas exploration, moved into geotechnical consulting, then moved into environmental consulting, then into construction project management, then back to environmental and geotechnical consulting work, which led to consulting for mining companies, primarily in the aggregate industry, and ultimately to my going to work for Martin Marietta Materials, my current employer.

What led you to join SME?

My dad stressed the importance of being actively involved in one’s profession, so I have always been active in the professional associations that focused on the areas I worked in. When I became involved with mining, SME stood out as the society that best aligned with my overall interests and professional attitudes.

How long have you been a member?

The thing I like best about the industry is the people. The men and women who work in the mines and those who support them are some of the nicest, hardest working, and most generally good people I have had the pleasure of working with. Even though we come from a wide variety of backgrounds, cultures, etc., there is a common thread of civility and mutual respect that is refreshing in today’s society.

What do you find most challenging about your job?

On the positive side, the diversity of tasks/issues that I get to/have to deal with, which is also one of the most rewarding challenges. On the negative side, the misperceptions regarding modern mining and those of us who work in the industry that pervades society.

What do you find most rewarding?

The diversity of tasks and issues that I get to deal with.

How has your SME membership enhanced your career?

My membership and active participation in SME led to my first full time position in the mining industry, and subsequently led to my current position. Membership continues to benefit me through the professional contacts that I have made and the information I acquire.

My favorite benefits are my Section meetings and the Annual meeting.

What would you tell your younger self about the industry or your career path?

Get involved sooner, especially on the producer side. I can honestly say that I have overall enjoyed being a part of a mining company more than my previous positions.

Who has been key in shaping your career and why?

My dad for too many reasons to list, but especially because he emphasized being a generalist who understood the pieces and how they fit together. That seems to be a far rarer skill set than the various specialties that go into mining.

Where do you think the industry will take you in the next decade?

Hopefully into retirement! However, once retired, I would like to focus my time and talent on changing the paradigm of reclamation such that reclamation becomes a value proposition and the reclaimed site ultimately becomes an asset in and of itself.