“[My] favorite benefits have been experience gained by working on various committees and being able to meet persons with different backgrounds. I have expanded my knowledge from these interactions.” 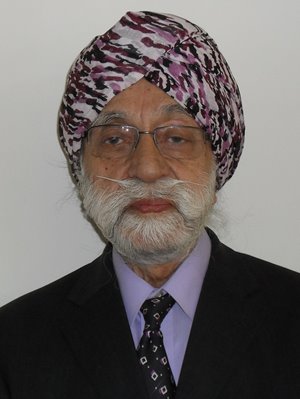 What was your background and when did you join SME?

I was one of 40 students that qualified to join the Indian School of Mines (now IIT [ISM]) though an all-India competitive examination for about 1,000 applicants in 1952. During our senior year we had Professor Roland Parks of MIT teaching us under the Columbo Plan. Towards the end of the school year he asked me if I would like to continue with graduate studies. I said yes, but there were no facilities for graduate work in mining in India at the time. He asked me to use his name as a reference and apply to mining schools in the Unites States.

I was first selected by the University of Illinois-Urbana-Champaign and I accepted. Shortly after joining my advisor Professor Rudolph G. Wuerker suggested that I should join the American Institute of Mining, Metallurgical and Petroleum Engineers (AIME) as a student. I joined in the Fall of 1956 and have remained a member since then. So I joined SME when it was formed.

Although most of the population in the U.S. does not recognize this, mining is an innovative industry and has met many of the challenges that have faced it. For example, when I first started going into coal mines your face was covered with coal dust when you came out after the shift and you could hardly recognize the person next to you. Coal workers’ pneumoconiosis was very prevalent; although not eliminated the incidence of the disease is considerably reduced. Monitoring of coal dust is universal; and even silica in the dust is checked. Dust in both coal and metal-nonmetal mines is suppressed at the source.

Numerous other advances in technology could be listed. Fatalities in mines have been markedly reduced; there were a total of 24 fatalities in 2019; there were 36 in farming.

How have you been involved in SME since you joined?

I have been actively involved with SME activities throughout my career. I secured the Graduate Division Student Paper Prize in 1958. I have worked on numerous committees of SME since I joined and have chaired the Coal and Energy Division, and the Underground Ventilation, Research, and Sustainable Development Committees. I have also chaired the Chicago and Maricopa Sections and received the Herbert C. Hoover Award from the Washington Section.

I have served on the Structure and Governance and the Products and Services Committees of SME. I was bestowed the Distinguished Service Award by both the C & E and the M & E Divisions. I have served on the Board of Directors of SME. I won the Eavenson Award of the C & E Division and the Rock Mechanics of SME. I am a Legion of Honor and Distinguished Member of the Society. These accomplishments are an indication of my dedication to SME.

Who has been someone that has been key in shaping your career and why?

The persons who have been most helpful during my career were Dr. Howard L. Hartman, my advisor at Penn State and Dr. Raja V. Ramani who has always given me advice whenever I needed it. I should not overlook Professor Roland Parks who encouraged me to come to the United States in the first place.

What did you find to be the most challenging periods in your career?

It was challenging when I graduated with a Ph.D. from Penn State. The mining industry had no openings for a person with a doctorate. Since I had worked on my thesis on the fundamentals of drilling and had a minor in petroleum engineering, I was able to secure a position in research in the petroleum industry. Later I was able to get a position in teaching mining.

The time when I started my own consulting company was also challenging. It was a risk since I had no reliable source of income and I did not have a significant reserve.

What do you find to be the most rewarding aspects of your career?

I feel rewarded with my accomplishments to date. As an immigrant to this country in 1956, when there were few Indians in the U.S. mining industry, I was able to have a successful career. I was able to make technical contributions to the industry in mine subsidence, high-pressure water jet usage for rock breakage, development of a lunar drill, advancing criteria for mining under water bodies, prevent water intrusion into nuclear waste repositories, microseismicity, sustainable mining, and several other developments.

I was able to start a company from a one-person operation to one with 50 employees and operate it for 30 years consulting for industry and government. I have worked in academia, a not-for-profit, state government, and the federal government.

I was elected to the U.S. National Committee for Rock Mechanics and served on the U.S. National Committee on Tunneling Technology. I have served on three committees of the National Research Council. I have been elected to be a Fellow of the American Society of Civil Engineers and a Fellow of the American Consulting Engineers Council. I was awarded the Robert Stefanko Distinguished Achievement Award by the Department of Energy and Mineral Engineering at Penn State and was selected Centennial Fellow by the College of Earth and Mineral Sciences at the same university.

The favorite benefits have been experience gained by working on various committees and being able to meet persons with different backgrounds. I have expanded my knowledge from these interactions.

In what ways have you seen the industry change since you first began your career?

I have seen the industry change remarkably since beginning my career. Now, most mining companies are very cognizant of the principles of sustainable development and about environmental issues that affect the communities in which they work. Attention is paid to the local tribes and their concerns and other governance matters. Safety of employees has become a priority and the term “zero tolerance” is customary. There are many technical advances and automation is nurtured. Use of GPS (global positioning system) for surface drilling and truck fleets is becoming routine. The list is long and expanding daily.

Where do you think the industry will take you in the next decade?

There will be many more innovations in the industry, and the acceptance of mining will increase. The need for critical minerals and our reliance on foreign sources has made it crucial that exploitation of national resources be accepted. The advances made by the mining industry will facilitate this acquiescence.