“The camaraderie of the… sections have all given me a perspective and understanding of what is happening in the industry, ethics, and what it means to be a mining engineer that I wouldn’t have had without those involvements.” 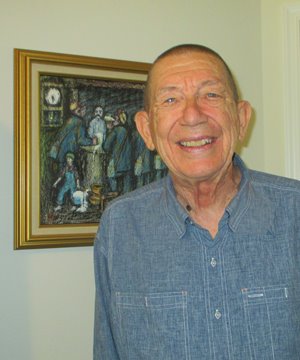 What led you to join SME? For how long have you been a member?

In 1961 Ed Dines, the head of the Pitt Mining Department was teaching an Introduction to Mining Engineering class to all six or so freshman mining students. Ed was enthusiastic about promoting AIME/SME and undersea mining, especially for manganese, which he was sure was going to be THE MINING JOB OF THE 1960s and we all ought to join AIME and become undersea miners! I guess it was a good thing that I took only part of his advice and became a student member that fall and I've been a member continuously since.

I have always remembered how Ed took time to teach that class rather than having a grad student do it, how he welcomed all the students and made us comfortable and how much effect his enthusiasm and friendliness had on me as a young kid. I have tried to do the same thing for my new people and for those I hope to motivate.

I guess I became one because no one ever told me not to. My great grandfather, his dad, his sons and their sons, mined coal clay, and limestone near Brady's Bend Pennsylvania. My dad ran a bulldozer in a strip mine there when he came home from the 2nd World War. My wife Pat's family emigrated from the Carpathian Mountains to work in the mines in Snowshoe, PA and Byesville, OH. My uncle couldn't believe that anyone would go to college to become a miner. Not one of them ever told me it wasn't a great way to make a living.

I'm a 59-year member of AIME/SME, I've had the chance to work with some of the best people in the world – famous/everyman, smart, hard-working, passionate men and women in mining. We worked in a limestone quarry once owned by Milton Hershey, at Cornwall, PA, where iron was mined in 1737, and we filled the pit at Summit Hill, PA, one of the places that anthracite was “discovered'. We worked together in Venezuela, at a startup sand mine in California, in the world's largest open pit mine in Hibbing and to reclaim mine legacy problems here in Pennsylvania. Who wouldn't keep at it?

Looking back on being a mining professional who was able to use all aspects of his geology, mining, mineral processing, environmental and product use education, and was able to have the good fortune to work for and with great people seems to be why I stayed at it. Sometimes it seems like a hobby, because I have a strong interest in the history of mining and management, and I've used that perspective to see what seems to work and what hasn't worked and why, and I've tried to pass that viewpoint on to others.

How has being an SME member enhanced or shaped your career?

Being part of local SME sections has been a real plus. Clearly, the opportunity to meet and network with old timers in the industry that had faced and worked through challenges I might someday meet, and sharing my experiences and excitement with younger folks is the best part of SME for me. The camaraderie of the student sections at PITT and Rolla, getting guidance from big shots at Lehigh Valley and Upper Peninsula Sections, and being active and a part of the leadership at Penn Anthracite and Sierra Nevada sections have all given me a perspective and understanding of what is happening in the industry, ethics, and what it means to be a mining engineer that I wouldn't have had without those involvements.

The Local Section was AIME's best idea. Especially since the growth of membership. Many of us have never been to a SME Annual Meeting - I guess I've been to five in my 59 AIME/SME-years, but I've been to hundreds to local section meetings, get-togethers, field trips, and lunches. A little bit of each of the contacts I've had at them has rubbed off. I hope the “virtual meeting” concept doesn't stick.

Our Penn-Anthracite Section is kind of the “mother ship” for AIME, and here in Wilkes Barre, there are at least three plaques honoring its founding. We've been host to at least the 50th, 60th, 100th, and 145th anniversary celebrations, and are we are looking forward to AIME's 150th next year.

Without a question, ONEMINE. I use ONEMINE a lot, and recommend it to others. It needs to be publicized, and I have given talks on its value. I don't miss a chance to encourage colleagues, historians, and the media to take advantage of this treasure of the industry's institutional knowledge.

I hope we can get SME and ONEMINE more involved with many of the other organizations in the mining, metallurgy, exploration, geology fields, to capture some of the thousands (?) of papers, posters, and presentations that are presented each year at their conferences and meetings. Heck, I guess there are hundreds of talks given at our SME Local Sections meetings that aren't written or recorded or otherwise preserved. We've got to do a better job at saving these records.

What do you find to be the most challenging aspects of your job?

Since I've “retired,” many of the challenges I had during my work life have gone away. I don't have anyone working for me.

Trying to be a good boss and provide leadership to a team was always the most challenging part of my jobs. In 1971 I got launched into management in the middle of a kerfuffle that eventually turned into a strike at Iron Mines Company of Venezuela. One day I went to work and they said “go home now and come back tonight, you're a foreman now!” It seemed that that was the extent of my training.

Over the years I had lots of technical skills training and also supervisory training, management training, leadership training with Bethlehem Mines, but it always seemed to me that you can instruct people about the administrative and policy parts of supervision and discuss the theories of how to manage, but you can't tell a person how to supervise, manage or lead.

Interpersonal challenges that occur in the workplace should be the target of any management training, and training and coaching should be aimed at developing better interpersonal skills – effective communication, creativity, adaptability, curiosity, collaboration, critical thinking, excitement. Don't worry Harvard, I'm not going to get into the education business.

What do you find to be the most rewarding aspects of your job?

My work and my job have always been a huge, important part of my life. The work we do in SME makes me feel like we are doing good for our families, for our companies, for the US and for the world.

I enjoy seeing our people doing good things, having fun doing them and succeeding in their careers. I am really proud of the folks who I've helped get ahead in their job. Each person who has taken a challenge of leadership in their job and flourished has made my day/week/year. I hope those of you who may be reading this know I am proud of you.

The part time consulting work I'm doing now is mostly fun, where I'm able to use my experience but still learn new things. It seems that mining engineering is seldom boring.

Who has been key in shaping your career, and how?

My dad's job always seemed to be really important to him, and I see why. I've always tried to emulate his approach to work, and I think he would be proud of me. My wife of nearly 54 years, Pat, has always given me valuable advice, is an example of doing things for others, has always supported me, been there when I needed her, and moved about 18 times with me to keep my “career” going.

I've been fortunate to have mostly good bosses, and learned from both them and the ones who weren't. I've been even luckier in that I have had fantastic people working for me. And great supporters make a boss look good. I've also had the chance to know and sometimes work with, or at least learn from, some of the great leaders of SME and the mining industry.

I'd like to mention a few of the people who shaped my career, even at the risk of hurting some feelings: Glen Eckhart, Harry Raschke, Keith Barlow, Tony Sossong, Massoud Keshari, Rod Fletcher, Ronald Ryczak, Larry Dobash, Eric Cavazza, Tom Gray. Thanks.

In what ways have you seen the industry change since you first began your career?

Everyone seems younger now than they did then. I was accepted to Lehigh University in 1961, but their last mining graduation class was 1964. I would have been 1965, so I went to Pitt. They dropped mining after 2 years there, and I went to Ohio State for a year, same thing. Rolla took me hesitantly. Except for Tetra Tech, every mine and company I ever worked for either has closed or been sold, or both.

In school, we were taught that Pangaea and plate tectonics was a THEORY. In 1968, we worked on a time and motion study to see if end loaders could and should be used as primary loaders in a mine or quarry. We started treating acid mine water as a part of our operations. MESA inspectors showed up in shiny new uniforms in the change house in 1969. Mine reclamation became a part of all mining. Coal will come back, it always does. Bethlehem Steel was too big to go bust. Things change. We get new friends. We get new chances.Where do you think the industry will take you in the next decade?

I kind of hope I'm still around in the next decade, I guess.

I'm not too big on my prospects of mining the moon, and I thought about and decided not to mine the sea. I've been talking about using mine water geo-exchange to heat and cool homes and businesses in the mining communities where mining has ceased. I think our closure plans can repurpose our reclaimed mine lands for economic development in those communities. We can and will continue mining coal for electric power and will achieve carbon capture to allow that.