"Get in and start working. You don’t have to hold out for the perfect job, just find one that is a good cultural fit for you and start networking." 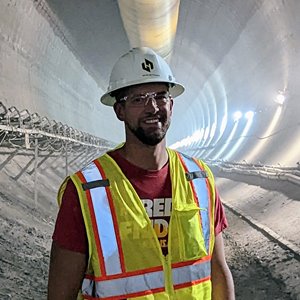 What do you do in the underground construction industry, and how long have you been in the industry?

I’m VP of Tunneling for Southland Holdings, LLC, a self-performing contractor in tunnels as well as other sectors including bridges, facilities, marine and water pipelines. My work spans business development and operations to help our team identify, win and support the execution of tunnel projects in the US and Canada.
I started in the industry in 2009 on the design side as an engineer in training with Black & Veatch. Throughout my career, I’ve had the opportunity to work in a variety of roles including design engineer, construction inspector, engineering manager, project manager, program manager, pursuit manager and business development lead. I left consulting in 2021, and I had the unique opportunity to lead business development for Elon Musk’s The Boring Company for a year and a half prior to joining Southland.

How did you get into the industry, and why did you decide to pursue it as a career?

My entry into tunneling was totally unplanned, I fell into it. My undergraduate degree is in civil engineering with an emphasis in open channel flow hydraulics, and I have a master’s in business administration. I had interned at Black & Veatch in their Water and Power sectors during college, and after I graduated in 2009 with my MBA the economy was in a rough spot and the opportunity they had open was in their tunneling group. I thought it sounded cool so I joined and was mentored by some great people and did a lot of on-the-job training. I am neither a geotechnical engineer nor a geologist, but I now know enough to keep up with the experts.
I stayed in the industry because it is an excellent market to work in with great people. There are many fascinating projects and a lot of opportunities due to a small talent pool in tunneling and an aging workforce. The market is also trending toward doing more underground and trenchless projects as our urban centers get denser and denser. It is a great industry to be in.

What is it like to work as an engineer on underground projects?

It is a crash course in risk management. At first, as an engineer it’s difficult to come to terms with the fact that even after an extensive geotechnical investigation you don’t really know what you are going to get into until you start mining.
I also enjoy the opportunity I’ve had to explain tunneling to the public and even other engineers who have a very limited understanding of how it works. There are many misconceptions about where tunneling is feasible, and I enjoy discussing this with technical and nontechnical audiences.

What professional achievements have defined you and made you proud?

In 2017 after Hurricane Harvey, I spent two years working with the Harris County Flood Control District, the U.S. Army Corps of Engineers Galveston District, the City of Houston and the consulting community to build a consensus that tunnels could be built to mitigate flood risk in Houston. Initially, everyone I talked to said building tunnels in Houston wasn’t possible because of the fat clay and high groundwater, but it was just a lack of understanding. Tunnels in similar or more difficult geology have been built successfully in places like Washington DC and other urban centers in the U.S. and around the world. It was a lot of fun to do nearly 50 presentations to community and stakeholder groups as part of an effort to educate and change their mind about the feasibility. Now five years after Harvey the concept is mainstream, and if funding is appropriated, I believe large stormwater tunnels will be built in Houston.
I’m also proud and fortunate to have had the opportunity to work on projects all over the United States in a variety of different roles. Spending a year underground on the 20 ft-diameter, 5 mile-long OARS CSO Tunnel in Columbus, OH on night shift and swing shift isn’t a role I’d volunteer for again today, but seeing a very difficult project built firsthand provided invaluable insights and has really benefited my career.

What are some of the biggest challenges you have faced, and how have they been meaningful?

The industry tends to be transient. Tunnel projects are often expensive and each city may not need or be able to afford an endless string of projects, so folks tend to follow the projects around. In my career, I’m on my sixth city in a journey that has included stops in Kansas City; Columbus, OH; the San Francisco Bay Area; Houston, and now Austin. As a husband and dad of three kids (born in three different states along the way), that has been a challenge to manage both personally and professionally, but it’s provided me with an opportunity to meet many more people and work in many different settings. I believe the variety of roles I’ve held by being mobile has given me at least two times the experience I would have gained by staying put in one place. This makes me a much more valuable professional and allows me to be involved in even more interesting work.

What do you hope the future holds for yourself and for the industry?

The Boring Company’s stated goal is to create safe, fast-to-dig, and low-cost tunnels.
There are a lot of benefits from delivering projects faster and cheaper, and I still believe in that mission as currently tunnels are often considered only as the solution of last resort. If as an industry we can make more reliable, faster mining machines, and we can develop, design and build projects more efficiently, it benefits everyone: the taxpayer, the politician, the public agency, and certainly the engineers and contractors. More tunnel projects would be a high tide for the industry, and high tides raise all boats.
To get there I believe we must be more creative about how we solve problems and focus on good, implementable solutions and not the perfect solution. Italian philosopher Voltaire is credited with the quote, “Don’t let perfect be the enemy of good,” and I believe that at times in the industry we spin our wheels too long on a perfect solution when the public would benefit more from a good solution that works that can be quickly implemented and improved upon in the future.

What is your advice to a student looking to enter the field?

Get in and start working. You don’t have to hold out for the perfect job, just find one that is a good cultural fit for you and start networking. Many roles in the industry only require a bachelor’s degree so once you have that, get in and get started and use your experience to help focus your efforts on advanced degrees. You may find your focus and interests shift to new fields as you get more experience. Plus your employer will often help support the cost of a graduate degree!
For engineers, definitely spend time on site for construction as it makes you a much more credible engineer. For constructors, think about better, faster and more cost-effective ways of doing things. Don’t be afraid to speak up with an idea if something doesn’t make sense. Also never forget that who you know is equally or more important than what you know.

What led you to join UCA?

I believe UCA is the best professional organization in the industry, and in addition to putting on great conferences and events it provides excellent technical resources and networking opportunities for its members. Participating in conferences as an attendee and presenter has allowed me to network and broaden my career opportunities and is a big contributor to my success.