As a member of the Coal & Energy Division of SME, you have access to professional networking and leadership opportunities with peers who share your career objectives.

The Coal & Energy Division of SME:

This event is a fantastic opportunity for division members to network while supporting the C&E Division scholarships. 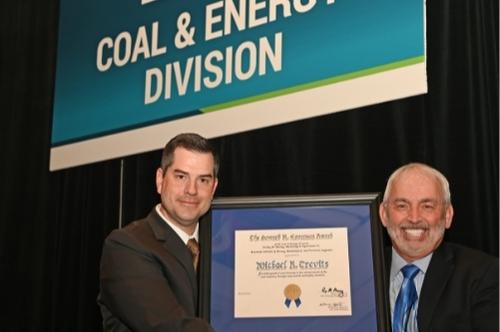 The Howard L. Hartman Award, established in 1989, recognizes distinguished contributions in practice, teaching or research in the field of underground ventilation engineering.

Underground Ventilation Unit Committee is open to anyone with an interest in underground ventilation.

The Committee shall review the nominations for the Aplan Award and select the recipient. The Frank F. Aplan Award (Aplan Award) recognizes engineering or scientific contributions that further the understanding of the technology of coal and/or mineral engineering. Eligible areas of recognition include agglomeration, classification, comminution, electrical and magnetic separation, flocculation and sedimentation, froth flotation, and other related processing operations.

The Award is administered by SME’s Coal & Energy Division.

The Committee shall have oversight of all activities within the Coal & Energy Division.

The Committee selects the recipient(s) of the J.W. Woomer Award. This award brings recognition of engineering professionalism to young people working in the coal industry.

The Howard L. Hartman Award, established in 1989, recognizes distinguished contributions in practice, teaching or research in the field of underground ventilation engineering. There are no limitations regarding age, nationality, professional field, membership in the Society, or otherwise.

The Coal & Energy Division Distinguished Service Award was established by the Coal & Energy Division in 1989 and the first Award was given in 1990. This Award will be presented to an individual for achievements in the coal mining industry. All candidates must be SME members in good standing and must be living at the time of their selection in order to receive the award. Members of the current award committee are not eligible to receive the award during their term of service on the award committee.

Howard N. Eavenson (1874-1953) obtained a bachelors degree from Swarthmore College and a civil engineering degree a few years later. At 26, he became chief engineer for United States Coal & Coke, a subsidiary of US Steel. For the next 18 years, he opened up several coal deposits and built 15 large coal plants in West Virginia and Kentucky. In 1920, Eavenson established his own consulting firm in Pittsburgh, PA and, by the time he became president of AIME in 1934, he was a director of Pittsburgh Coal Co. and chairman of the board of Appalachian Coals - a joint selling agency through which 137 producers of bituminous coal marketed more than 45 Mt/pa (50 million stpy).

At a joint Fuels Meeting of the ASME Fuels Division and the AIME Coal Division in St. Louis, Missouri in 1942, the fall after Percy Nicholls died, the first Percy Nicholls Award was presented. This award was established by the two divisions to commemorate the outstanding contributions that Nicholls had made in the science and technology of fuels utilization. It is presented jointly by the Fuels and Combustion Technologies Division of ASME and the Coal & Energy Division of SME.

Erskine Ramsay (1864-1953) graduated from Saint Vincent College in Latrobe, PA in 1883. By age 20, he was the superintendent of H.C. Frick Coke Co.'s Monastery mines and coal works, which produced the third largest amount of coal in Pennsylvania. He then joined the Tennessee Coal, Iron and Railroad Co. at its Pratt Mines near Birmingham,AL and, in 1895, became the assistant general manager. An avid inventor, Ramsay was granted his first patent in 1897, for a coal and mineral washer. Subsequent inventions centered on improvement in the coal-mining process and in the safety of miners. Ramsay was involved in the design of a mine car with a safety cage and an automatic car stop.

Other inventions include the rotary car dump, the swivel coupling, the use of shaking screens and improved washers.The latter two inventions improved the process of removing coal from other minerals in a more efficient manner.

Ramsay served as head of the Republican National Committee and, in 1911, was appointed by the U.S.Bureau of Mines as member of a commission to study coal-mining methods in Europe. During World War I, he served on the Committee on Coal Production. He received the William Lawrence Saunders Gold Medal in 1937.

The Rock Mechanics Award shall be given for distinguished contributions to the advancement of the field of rock mechanics and is open to all regardless of age, nationality, SME membership, or professional field. There are no limitations regarding nationality or membership in the society, though preference is given to society members. All candidates must be living at the time of award presentation.

The Stefanko Best Paper Award, established in 1983, recognizes authors presenting papers in the Coal & Energy Division technical sessions, at SME Annual Meetings, for their contributions to the body of knowledge. The award shall consider: 1) technical quality of the paper; and 2) quality of presentation. The award shall consist of a cash gift and certificate(s) for the author(s). In case of multiple authors the cash gift shall be divided equally among the authors. No Nominations will be accepted.

The J. W. Woomer Award (formerly the Young Engineer Award) established in 1976, brings recognition of engineering professionalism to young people working in the coal industry. Election to this honor is by the Coal & Energy Division Officers with notification to the SME Executive Committee. The nominee must not reach their 35th birthday before the Award is to be presented at the Annual Meeting.

The Coal & Energy Division of SME annually awards scholarships to promising college students who have chosen as a career path the field of mining engineering with an emphasis on coal mining, coal processing, or other mining -related energy sources (including geothermal, oil sands, oil shales, coal bed/mine methane, uranium, unconventional oil sources through mining, etc.). Eligible students may submit one application in consideration for both the Coal & Energy Division Scholarship and the John Sidney Marshall Memorial Scholarship. The John Sidney Marshall Memorial Scholarship, funded by AIME, is administered by the Coal & Energy Division and awarded annually to one or more undergraduate mining engineering students planning to pursue careers in the coal mining industry. To submit an anonymous recommendation letter for a student, please email it to scholarships@smenet.org with the student's first and last name and the scholarship name as the file name.