As a member of the Industrial Minerals & Aggregates Division of SME, you have access to professional networking and leadership opportunities with peers who share your career objectives.

The Industrial Minerals & Aggregates Division of SME brings together non-fuel mining industry professionals from the industrial minerals processing and mining engineering community for the following:

The Forum on the Geology of Industrial Minerals where Geologists from all over the world come together to share the importance of industrial minerals. Learn more at https://fgiminc.com/2021/01/22/57th-fgim-forum-2021-virtual-event/

This event is a fantastic opportunity for division members to network while supporting the Industrial Minerals & Aggregates Division scholarships. 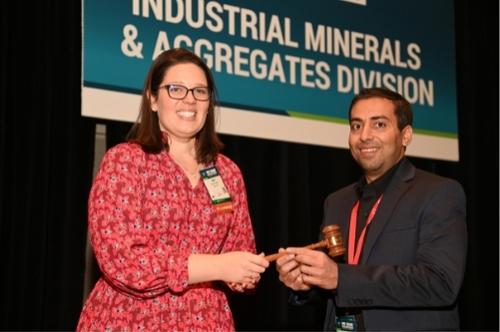 The Committee shall have oversight of all activities within the Industrial Minerals & Aggregates Division.

There are currently no members to display for this committee.

The Nominating Committee shall be responsible for nominating appropriate candidates to serve on Division and SME Committees as needed.

The Program Committee has the duty of coordinating programming and social events for the Division as needed.

The Committee shall be responsible for collecting and review articles for industrial minerals and aggregates and publish in July issue of Mining Engineering magazine.

The Hal Williams Hardinge Award, established in 1958 and funded by AIME, recognizes outstanding achievement which has benefited the field of industrial minerals & aggregates. The achievement so recognized may have been accomplished through writing, teaching, research or administration, resulting in new uses, wider markets, improved management, or through wider dissemination of knowledge. The award shall be a plaque, appropriately engraved with the name of the award, the name of the recipient, and the citation of the particular achievement for which the award is being conferred.

There are no limitations regarding nationality or membership in the AIME Member Societies, but preference is given to members. If a committee member is nominated, they will either find a replacement committee member so that they can resign for the year or remove their nomination until their term is up. Candidate must be living or passed away prior to May 1st of the nomination year.

AIME Board members are exempt from receiving AIME awards.

The Young Scientist Award, established by the Industrial Minerals & Aggregates Division in 1985, brings recognition of scientific professionalism to young people working in the Industrial Minerals & Aggregates industry. The recipient will be encouraged to submit an article within a year of the award presentation for consideration for publication in "In the Aggregate." The nominee must not reach his or her 40th birthday before the Award is presented at the Annual Meeting. The award may be presented to a non-member of SME with the provision that the Division makes him/her a member by awarding him/her a one-year membership.

The Gerald V. Henderson Memorial Scholarship (Henderson Scholarship) is open to undergraduate or graduate students who are pursuing degrees in geology, mining engineering or mineral economics with special interests in an industrial minerals and aggregates-oriented program.

To submit an anonymous recommendation letter for a student, please email it to scholarships@smenet.org with the student's first and last name and the scholarship name as the file name.