As a member of the Mining & Exploration Division of SME, you have access to professional networking and leadership opportunities with peers who share your career objectives.

The Mining & Exploration Division provides a means for cooperation and communication among professionals engaged in the mining of metals, research, specialized aspects of mining, and exploration technologies.

The M&E Division advances these industry segments by:

This event is a fantastic opportunity for division members to network while supporting the Mining & Exploration Division scholarships. 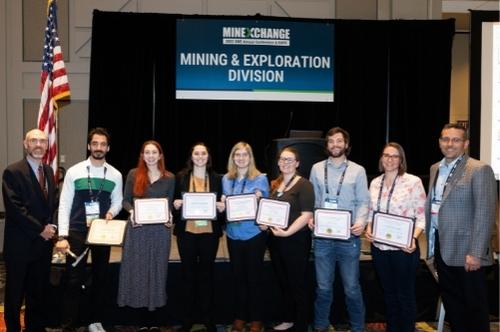 The Howard L. Hartman Award, established in 1989, recognizes distinguished contributions in practice, teaching or research in the field of underground ventilation engineering.

The Dickerson Award is administered by the Mining & Exploration Division (M&E Division) of the Society, under the direction of the SME Board of Directors.

The Jackling Award is administered by the Mining & Exploration Division (M&E Division) of the Society, under the direction of the SME Board of Directors.

The Award is administered by the Mining & Exploration Division (M&E Division) of the Society, under the direction of the SME Board of Directors

The Committee shall have oversight of all activities within the Mining & Exploration Division.

The Award is administered by the Mining & Exploration Division (M&E Division) of the Society, under the direction of the SME Board of Directors.

The Award is administered by the Mining & Exploration Division (M&E Division) of the Society, under the direction of the SME Board of Directors.

There are currently no members to display for this committee.

The Award Committee is to consist of the members of the M&E Division Program Planning Committee.

The Committee shall review the applications submitted and select the recipients of the M&E Division Scholarship and the AIME Henry De Witt Smith Graduate Scholarship.

Ben F. Dickerson III was a member of AIME from 1962 until his death in 1987. He served on the Board of Directors and was Chair of the M&E Division. He will be remembered for his numerous "ROCK IN THE BOX" columns which he began writing in 1980, and also for the humor, wit and satire of his "News and Rumor from the Bush" articles featured in Skillings Magazine. He believed in professionalism and encouraged his employees to participate in professional societies in order to grow in their profession. Besides AIME, he was a member of SEG, GSA (Society of Geology Applied to Mineral Deposits), SIMM, AIPG, Colorado Mining Association, Northwest Mining Association, Mining Club of the Southwest, Mining Club of New York, and the Arizona Geological Society, to name just a few. He abhorred ignorance and apathy. His curiosity was boundless; he never stopped asking "Why?"

The Daniel C. Jackling Award was instituted by the Mining, Geology and Geophysics of AIME in 1953. Daniel C. Jackling, for whom the Award is named, was an Honorary Member of AIME and President in 1938. The Jackling Award is presented for significant contributions to technical progress in the fields of mining, geology and geophysics or other applicable fields as determined by the Mining & Exploration Division.

The M&E Outstanding Young Professional Award, established in 1996, recognizes the meritorious accomplishments of a young individual working in the mining and exploration industry (including related academic and governmental careers). The award shall consist of a plaque appropriately engraved with the name of the award and the name of the recipient. The nominee must be 35 years of age or less at time award is to be presented.

Miner of the Year Award

The Miner of the Year Award was established by the Mining & Exploration (M&E) Division in 2012 and was first awarded in 2013. It is presented to a person in recognition for getting “Rock in the Box.” This award is designed to recognize mine-site leaders who are able to manage production, people, community, safety and be good stewards of the environment and is funded by Epiroc (previously Atlas Copco, Inc.)

The award recognizes individuals who most exemplifies the effort and insight Harry Parker has brought to improve the mining industry. His work in resource/feasibility reporting and geostatistics has improved the investment community’s perception of mining ventures.

The Robert Peele Memorial Award, established in 1953, is funded by AIME. The paper under consideration must have been published in an SME publication within a two-year period ending December 31. Only the first author of a paper must be an SME member not over 35 years of age at the time the paper is submitted. The award is limited to authors of M&E Division papers. Nominations cannot be accepted, view the guidelines for the procedure.

William Lawrence Saunders was born in 1856 in Columbus, GA, the son of Episcopal minister William Trebell Saunders and Eliza Morton of Virginia. He graduated from the University of Pennsylvania. As a young man, Saunders invented the apparatus for underwater drilling and became wealthy as a result of his equipment being used in the Russian oil fields. He was the founding editor of Compressed Air magazine and published two textbooks on compressed air. In 1904, he became president of the Ingersoll Sergeant Drill Co. after the death of William Russell Grace. He became the first president of the now combined Ingersoll Rand in 1906. As the twice-elected mayor of North Planfield, New Jersey, he campaigned for woman's right to vote.

During World War I, Saunders was chair of the Naval Consulting Board, which collected inventions and ideas from engineers and inventors to be used in the war effort. He also served as the 1915 president of AIME and deputy chairman of the Federal Reserve Bank of New York. He died in 1931.


Nominations for this award are currently closed.

The Eugene P. Pfleider Memorial Scholarship is administered by the Mining & Exploration Division and is awarded on an annual basis to students pursuing careers in mining engineering. To submit an anonymous recommendation letter for a student, please email it to scholarships@smenet.org with the student's first and last name and the scholarship name as the file name.

Steven C. Potter was a well-respected, well-liked, and highly successful economic geologist who worked his entire career in pursuit of discoveries, largely across North and South America, for companies such as Ranchers Development, Homestake, Bear Creek Mining, Kennecott Exploration, and BHP Billiton, in addition to several successful junior exploration groups. The Steven C. Potter Scholarship (Potter Scholarship) is to be awarded annually to a graduate student who is an SME student member, and whose thesis is directed toward furthering the understanding of ore deposit systems and their formation, geologic mapping and analysis of an ore deposit or mining district, or developing concepts or tools that may be used in economic geology or exploration. To submit an anonymous recommendation letter for a student, please email it to scholarships@smenet.org with the student's first and last name and the scholarship name as the file name.

The Henry DeWitt Smith Graduate Scholarship (Smith Scholarship) was established in 1967 to assist worthy students in the pursuit of their graduate education in the mining, metallurgical, materials, or petroleum departments of leading universities and colleges in the United States and Canada. To submit an anonymous recommendation letter for a student, please email it to scholarships@smenet.org with the student's first and last name and the scholarship name as the file name.

The Stewart R. Wallace Memorial Scholarship (Wallace Scholarship) was founded in 2011 through a generous contribution from the estate of Stewart R. Wallace. The Wallace Scholarship is awarded annually to a master’s degree candidate in geology or geological science who plans to pursue a career in the field of exploration geology. To submit an anonymous recommendation letter for a student, please email it to scholarships@smenet.org with the student's first and last name and the scholarship name as the file name.