A Brief History of the Society

Since its inception, SME has continued to evolve over the years to stay abreast of industry changes and to reflect the ever-broadening interests of its members.

AIME was founded in 1871 by 22 mining engineers in Wilkes-Barre, Pennsylvania. The original name was the American Institute of Mining Engineers with the objective "to promote the arts and sciences connected with the economic production of the useful minerals and metals, and the welfare of those employed in these industries by all lawful means. Also, to hold meetings for the reading and discussion of professional papers, and to circulate by means of publications among its members the information thus obtained." From its humble beginnings, AIME has grown to represent over 200,000 members worldwide.

The word "Metallurgical" was added to the Institute name in 1919, recognizing that the American Institute of Metals had become a part of the organization in 1918. Petroleum was added in 1956 in recognition of the significant growth of the petroleum engineering profession in the Institute.

Although still a centralized organization, AIME in 1949 gave recognition to the polarization of its activities around the disciplines of its name by the formation of three branches - Mining, Metals, and Petroleum. Each of the three then formed its own monthly magazine to replace the Institute journal, Mining and Metallurgy. The Mining Branch magazine became Mining Engineering with the first issue published in January 1949.

As AIME grew in response to the increasing trend toward specialization among mineral and extractive industry engineers, SME evolved as well and is now comprised of eight Divisions: Coal & Energy (1930), Industrial Minerals and Aggregates (1935), Mineral and Metallurgical Processing (1948), Mining and Exploration (1949), Environmental (1997), Underground Construction Association of SME (2006), WAAIME (2008) and Health and Safety (2015).

AIME continued to grow and the nature of its activities continued to increase in complexity. In the 1950s, it became apparent that each of the branches needed greater autonomy over its own concerns. As a result, in 1957 three constituent societies of AIME were formed - the Society of Mining Engineers (SME, now the Society for Mining, Metallurgy & Exploration), the Metallurgical Society (TMS, now the Minerals, Metals & Materials Society), and the Society of Petroleum Engineers (SPE). On December 1, 1974, the Iron and Steel Society (ISS) was formed as the fourth constituent society of AIME. In 2004, ISS merged with AISE to form the Association of Iron and Steel Technology (AIST), which is now the fourth AIME Member Society.

In 1972, each of the constituent societies of AIME increased its autonomy when it assumed responsibility for its own business affairs that had been previously handled by the centralized AIME business office in New York City.

For business and liability reasons, and after years of study, the AIME Bylaws were amended in 1983, permitting separate incorporation of the member societies.

All these proposed documents were approved and the societies applied for incorporation in their home states and for federal income tax exemption under Section 501(c) (3) of the Internal Revenue Code. This is the same tax classification previously assigned to AIME and permitted the transfer of assets from AIME to the societies.

On Sept. 18, 1984, the Society of Mining Engineers (SME) Inc. was established as a Colorado corporation and subsequently was granted a 501(c) (3) tax exemption. Governance, operations, and assets were transferred from SME-AIME to SME, Inc. on Dec. 2, 1985. 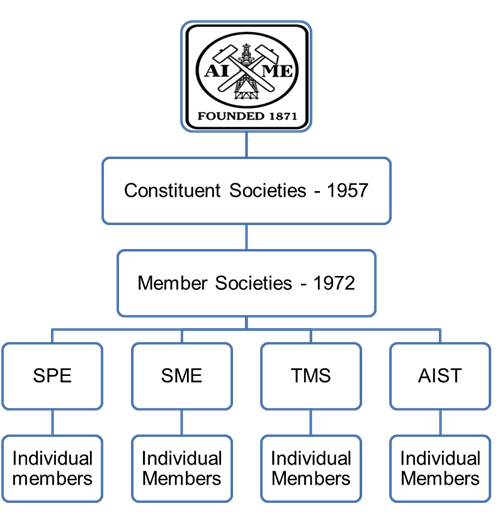 Growth in membership and a need to establish an appreciating asset, among other factors, brought to life the dream of building the permanent headquarters of SME.  After careful consideration of several building sites in Salt Lake City, Utah, and Denver, Colorado, the Ken Caryl Ranch Business Center in Littleton, Colorado, was chosen. The land was purchased in September 1978 and construction started in December 1978. The building was completed in the summer of 1979 and occupancy took place in August of the same year.

An outdoor dedication ceremony was held on November 7, 1979, at which time the numerous donors to the fund drive, "Build for the Future," were honored. Permanent displays within the original SME Headquarters building recognized significant contributions by individuals, minerals industry companies, education institutions, and society groups such as Local Sections and Student Chapters. In 2003, the AIME corporate office relocated to space within the SME offices in Littleton, Colorado from New York City, New York.

In 2010, an ad hoc committee was formed to determine how SME should be planning for its future building needs as SME had outgrown its current space.  In March 2011, SME moved to a new headquarters in Englewood, Colorado enabling the Society to better serve its members and adequately plan for its future.

For years, geologists, metallurgists, economists, and other members had expressed concern that the name of the Society did not truly represent the breadth of the interests of the membership; further, the name was considered misleading to many potential members who perceived that they must be a mining engineer to join.  At the SME Annual Meeting of Members held in Las Vegas, Nevada, on February 26, 1989, the members voted to change the name of the Society from Society of Mining Engineers, Inc., to the Society for Mining, Metallurgy & Exploration, Inc.

The SME Foundation was established in 1991 to support scientific, technical, and educational outreach activities; foster information exchange and understanding for responsible development of mineral resources; and further professional development for people in the minerals industry. Today the mission of the Foundation is to support mining’s challenges with a few key programs that are focused on supporting professionals, distribution of scholarships and educational outreach activities.

In 1995 SME changed its governance process to include six regional vice presidents on the board of directors and institute an election of the president and a vice president of finance. The first non-slate election was held in 1995. After six years, the Society returned to the single presidential candidate model who is chosen by the nominating committee, ratified by the board, and voted upon by the membership as part of a slate of officers and directors.

In 2005 SME created a governance ad hoc committee which evaluated the effectiveness of SME governance. Following an extensive review by the ad hoc committee, it was recommended to the SME Board of Directors to downsize from 41 directors and officers to a board of 10 members with no executive committee and eliminate the mandatory representation of Divisions and Regions on the Board. There are now four officers and six trustees with eight of those individuals having voting privileges. In addition, a set of six strategic committees were adopted to evaluate, strategize and determine the plan forward on SME programs and services.  Since 2006, this model has served the Society well.

In the past 15 years SME has experienced considerable growth and is managed by a staff of 48 professionals with experience in publishing, meeting development, marketing, content development, educational outreach, information systems, member relations, web development and accounting. The Society provides a wide array of educational and professional networking opportunities as it continues to be the premier resource for the international mining and underground construction communities.

See how well we leverage our expertise, strength, and influence to make a difference each year.

Supporting the education and outreach of SME and the community it serves.