Restoration of an aging transportation infrastructure in the United States will require the availability and production of a substantial amount of aggregates. Aggregates (crushed stone, sand and, gravel) provide the literal foundation of our nation and are, therefore, an essential component of the U.S. infrastructure. Aggregates are used in roads, highways, railroads, bridges, dams, and other residential and commercial construction. According to the U.S. Geological Survey (USGS), in the construction of interstate highway, natural aggregates—crushed stone, sand, and gravel—account for 94% of the materials used, with cement (3%), asphalt (2.2%), and steel (0.4%) making up the rest..[i]

According to the American Society for Civil Engineers’ (ASCE) 2017 Report Card for America’s Infrastructure,[ii] the United States received an overall D+ grade for the state of its infrastructure, a rating that has not changed since 2013. The ASCE also estimates that $206 billion in capital investment would be needed on an annual basis to significantly improve conditions and to prevent employment losses and reduction of the nation’s Gross Domestic Product. Total required spending would have to reach $2 trillion through 2025 and beyond. Thus, it is clear that the United States will need to rely upon increased production and use of aggregates mineral products to meet future infrastructure needs.

Natural aggregates—including crushed stone, sand, and gravel—are a basic raw material used for residential, business, and government construction projects, as well as in agricultural, chemical, and metallurgical processes. Many manufactured products also require natural aggregates. The industry is a significant contributor to the economic wellbeing of the United States, generating $27 billion in annual sales and employing 100,000 mostly skilled workers. Impacts are felt throughout the broader economy. According to the National Stone Sand & Gravel Association’s Aggregates Industry Scorecard, the industry also supports $122 billion in national sales, $32 billion in national earnings (i.e., wages), and between 364,000 and 600,000 jobs across a wide range of occupations and industries.[iii]

This study also reports that “each job in the aggregates industry supports an additional 4.87 jobs throughout the economy. These jobs are widely spread across industries and occupations. Each dollar of earnings (i.e., wages) creates another $4.19 of earnings in other sectors, and each dollar of sales in the industry produces another $3.47 of sales in other industries.” The effect of the aggregates industry is both large and diverse. Proposals to expand infrastructure spending to repair and expand the nation’s infrastructure portend a higher demand for the aggregates industry’s outputs and, in turn, a positive and material impact on jobs, earnings, and sales in many sectors of the nation’s economy. There are more than 10,000 construction aggregate operations nationwide. Proximity to market is critical, as aggregates are a high-volume commodity subject to high transportation costs. Consequently, 70 percent of our nation's counties include an aggregates operation. Virtually every congressional district is home to a crushed stone, sand, or gravel operation as the 2012 illustration (Figure 1; still valid today) shows. 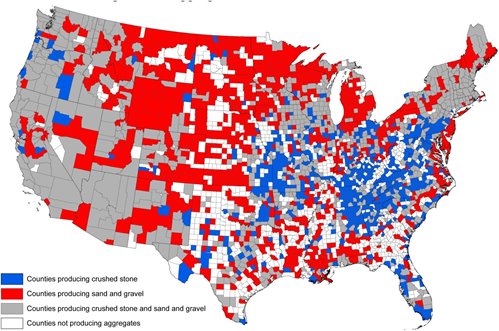