What particles raise human health concerns? Which do not?

“Elongate mineral particle” is a broad descriptive term and not a rigorous mineralogical definition. In 1990, NIOSH revised its recommended airborne asbestos exposure limit to include elongate mineral particles. Elongate mineral particles are classified as any particles of certain minerals with an aspect ratio of 3:1 or greater. The absence of such a definition and the failure to distinguish harmful EMPs (such as asbestos) from ordinary rock and soil dust that is present in most environments, could lead to both ineffective and costly regulation of industries and industrial processes that are essential to human civilization. Further compounding the issue is the lack of sensitive, accurate and precise analytical methods that can distinguish asbestos fibers from other EMPs having the same elemental composition or crystallographic structure (2011, DHHS NIOSH Bulletin 62 Asbestos Fibers and Other Elongate Mineral Particles).

Often it is assumed, since EMPs share a similar size and shape to asbestos, that they have similar effects on lung tissue cells. Since EMPs are often chemically and physically different from asbestos, this fact may be more important in causing lung disease than just the particle’s size and shape attributes. For example, prior research on crystalline silica particles revealed that their surfaces’ chemical reactivity actually controls the degree of interaction with human cells. Freshly fractured and crushed silica was shown to be more bioreactive; whereas, geologically old or weathered silica had very little effect on human tissue. It is believed that the surface of such weathered silica had already reacted with other atoms within its environment thus making it no longer harmful (via collaborative Sorptive Minerals Institute research publications).

Also, given the absence of comprehensive epidemiological EMP studies documenting “asbestos-like” health impacts on human populations, and this lack of both a clear definition and a clear scientific understanding of elongate mineral particles that do not contain asbestos, it is difficult to determine if various EMP’s present public health and safety risks. Therefore, the scientific community should precisely define EMP classification with respect to their identification, characterization and quantification, prior to creating regulatory solutions that could create both adverse economic and social impacts.

EMPs refer to specific inorganic compounds or materials that have specific physical and chemical properties at microscopic scales. The six commercial varieties of asbestos EMPs are often paired with their non-asbestiform (non-harmful) mineral counterparts found in rocks and mineral deposits. Such paired minerals are chemically identical but have uniquely different growth habits. This brings us to the science of morphology, or, as it applies to minerals, the study of forms of minerals and the relationships between their structures. A mineral, for example, can occur in different growth forms, or crystalline “habits” (its general appearance), so different particles may have different morphologies. However, because they share the same basic chemical composition and atomic structure, they are classified as the same mineral. Different “habits” are not recognized as having different mineral names, although they may have separate industrial names. The non asbestos EMPs are common rock-forming minerals and have not been shown to cause asbestos-like health effects, despite, as the following map shows, their abundance and frequent occurrence.

USGS MAP: WHERE EMPs OCCUR IN THE US 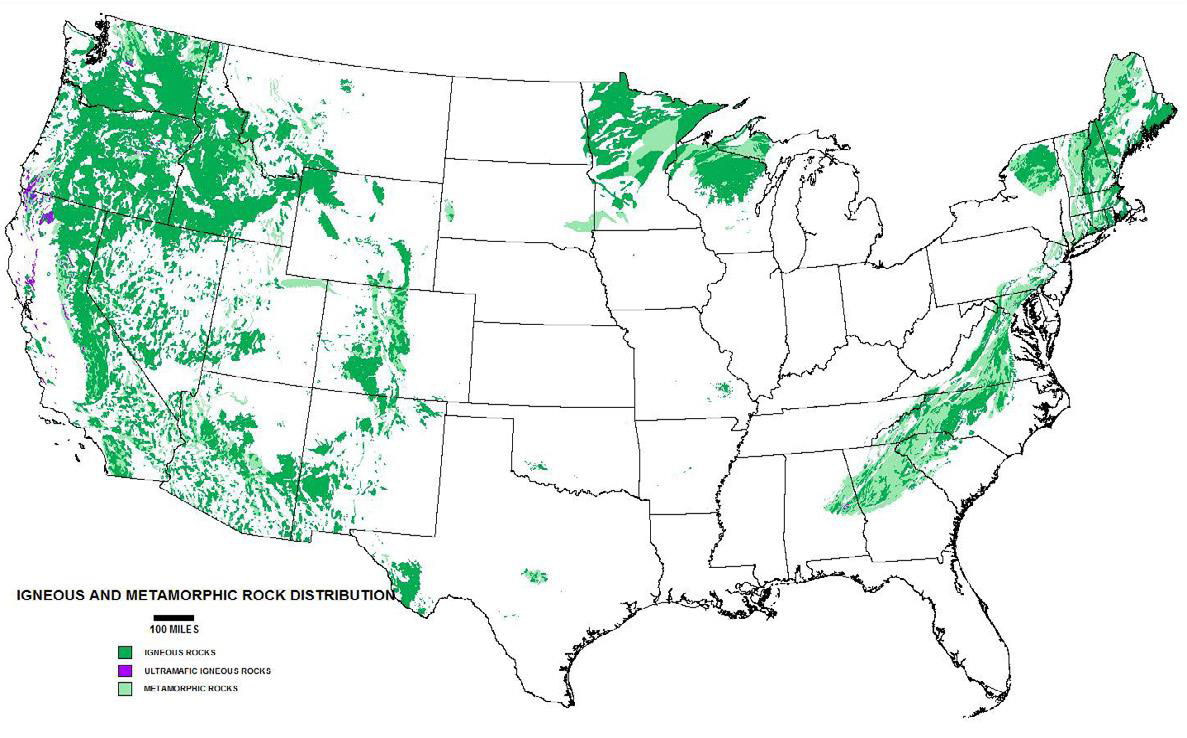 EMPs can be found in many states, and are common in surface deposits of igneous and metamorphic rocks. Vastly more frequent are the non-asbestos EMPs found in rocks and soil nationwide, as this map shows.

“Asbestos” according to the USGS is a regulatory and industry term rather than a mineralogical definition. It is a commercial designation for mineral products that possess high tensile strength, large length-to-width ratios, flexibility, resistance to chemical and thermal degradation, and high electrical resistance, and that can be woven. Such particles generally comprise bundles of fibrils, which are the smallest crystalline units of EMPs. Fibrils typically are less than 50-70 nanometers in width and can be several hundred nanometers in length. It is these characteristics and differences in appearance (see figure below) that can render asbestiform minerals harmful to human health. 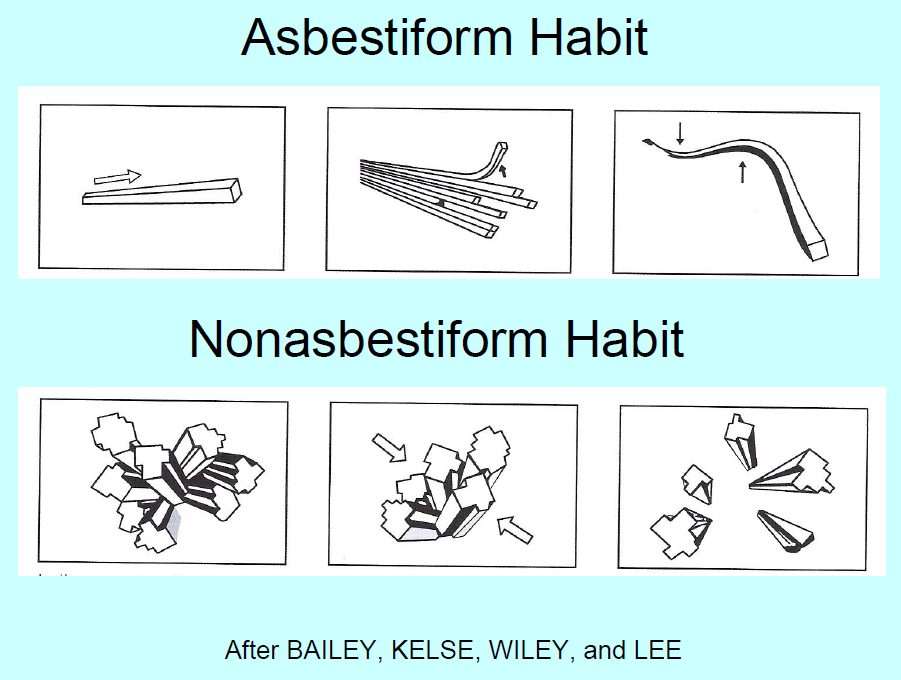 As this figure demonstrates, there are marked physical differences in the appearance of asbestiform and non-asbestiform minerals. (2002, Virta)

The absence of such characteristics is what makes non-asbestiform minerals safe for use in our daily environments. Thus, clear and accurate EMP definitions are critical to the public, government, academia and industry to help develop policies that clarify the risks from asbestos and non-asbestos containing materials contained in rocks, aggregates, minerals, engineered synthetics, ceramics, and nanomaterials.

The scientific community should precisely define EMPs (of which asbestos minerals are part) based on their chemical makeup, physical and morphological properties, appropriate analytical methods and criteria for identification, and other relevant biochemistry and epidemiological factors. Any definition should exclude common rock fragments, some of which can have identical chemical composition as EMPs – and thus may be mistakenly identified as hazardous when improper assay methods are employed.

Asbestos fibers, a group of elongate mineral particles, have long been known to cause disease when inhaled. However, the potential health effects of the broader class of EMPs, and the characteristics that confer toxicity, are still poorly understood. As a result, the complex and evolving terminology used to name and describe the various materials from which airborne EMPs are generated has led to much confusion and uncertainty in scientific and lay discourse related to asbestos fibers and other non-asbestiform EMPs.

Further interdisciplinary research is needed to assess the possibility of biotoxicity and bioreactivity for some EMPs. The few studies that have assessed biopersistence or durability suggest that non-asbestiform EMPs are not as biopersistent as asbestiform fibers of the same length. However, more information is needed to systematically assess the ranges and importance of biological reactivity and persistence in determining toxicity.

Developing a better understanding of the important determinants of toxicity for EMPs will involve ascertaining other physical and chemical surface properties of EMPs that influence their toxicity, and their underlying mechanisms of action in causing diseases. An important need is to develop improved sampling and analytical methods that can be rigorously applied to characterization and quantification of EMPs of toxicological importance, and that are capable of differentiating EMPs by defining critical characteristics demonstrated to be important in causing disease. In conjunction with better analytical methods, results of toxicity studies should be assessed in the context of epidemiology (i.e., distribution, patterns and determinants of disease conditions in populations) as a basis for understanding the human health effects of exposure to EMP’s.

Ultimately, management of risk needs to be based on an understanding of the science related to exposures to various EMPs, and a robust and rigorous understanding of the particle characteristics to which humans are or could be exposed to in their environment. Clarity will support newer risk-based assessments potentially contributing to new policies for exposures to airborne asbestos fibers and other EMPs in protecting public health.