Understanding the future availability of minerals requires a global perspective. World industrialization, urbanization, and population growth are driving demand for minerals and metals. Renewable, clean energy, and even some conventional energy demand is expected to increase significantly in the coming decades – placing even more emphasis on supply, security, and environmental impact issues.

With a renewed emphasis on clean energy and electric vehicle technologies, competition for minerals will grow. It is essential to know where deposits are located, the technologies necessary for production, and the costs of producing and transporting the products to consumers. As mining companies look to maintain or increase their operating capabilities and mineral resource bases, the search for commodities expands beyond developed terrestrial regions of the world, including marine resources. (Figure 1) Operating challenges in these locations include finding skilled workers, building infrastructure, improving recovery technologies and practicing sustainable development.

The world’s population is expected to increase by 25% from 7.7 to nearly 10 billion by 2050.i Although birth rates and population growth are expected to level off by 2100 at around 10.9 billion, urbanization is increasing substantially. As populations grow, infrastructure needed to serve demands for reliable power, transportation, housing, clean water, and sanitation increase the need for minerals. In addition, as these populations transition to clean energy sources, the demand for copper, nickel, cobalt and manganese increase.

Many countries rely on income from the mining industry, a key employer, to support their national economies. In Chile, for example, mining accounts for 10% of GDPii, while mining in Peru contributes 10% and 60% of its exports.iii In Australia, mining accounted for 10 % of GDP in 2020.iv

Rising prices and terrestrial depletion of many industrial commodities point to a growing interest in locating and developing mineral resources under the ocean, covering about 70% of the Earth’s surface. The potential for commercial minerals per unit area in the oceans and seabed appear to be similar to that of the terrestrial lands. Thus, almost ¾ of the global mineral resources are in, or under, the sea and are virtually untapped.

Half of the global seabed minerals are now controlled by nations within their Exclusive Economic Zones and the other half by the United Nation’s International Seabed Authority as a common heritage of humankind. Regulations governing deep-sea mining will take longer to finalize due to the global pandemic, creating uncertainty for companies looking to mine the sea bed for metals, including cobalt and nickel used in electric vehicles and other technologies. Seabed mining is not allowed until the regulations are finalized.v

Resource nationalism is also on the rise, and is spreading to top mining countries in the world, including North America, Latin America, Europe and Asia. The trend involves possible renegotiation of contracts, dramatic increases in taxes and royalties, and even outright nationalization of assets.vii

This trend could further threaten mineral supply chains, especially here in the United States, given our nation’s increasing reliance on minerals produced in other countries. Despite reserves of some 78 important mined minerals, the U.S. currently attracts only 11% of worldwide exploration dollars, compared with 20% in 1993. 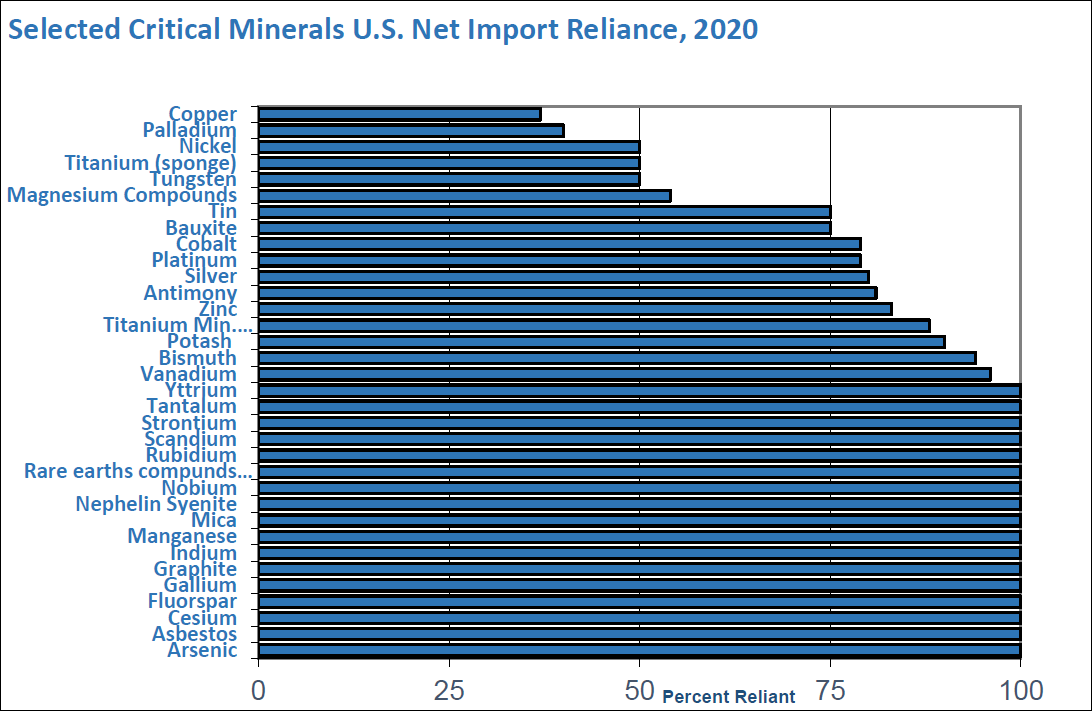 The increasing import reliance not only threatens America’s national security, it will also hinder the transition to a clean energy future. The World Bank reports that “the production of graphite and lithium and cobalt, would need to increase nearly 500% by 2050, to meet demand. It estimates that over 3 billion tons of minerals and metals will be needed to deploy wind, solar and geothermal power.”xi Recycling will only be able to meet a portion of this demand. Thus, it will be necessary to continue to produce minerals from new and existing mining operations indefinitely.xii