Mining: Production and Control of Arsenic

Arsenic is a naturally occurring element found in many rocks and minerals in the earth’s crust. It is also classified as a critical mineral and has important uses in our economy and clean energy technologies. Arsenic is a persistent bio-accumulative carcinogen, however, the most significant chemical contaminant in drinking-water globally and has significant health and environmental effects. Thus, it is subject to strict regulation in the U.S. and other countries.

Arsenic is commonly found as an impurity in sulfide ores, and is produced commercially for use in pesticides, wood preservatives, metal alloys, and other technologies. It is also listed as critical mineral under Presidential executive order 13817, because it has important uses in our economy, especially in gallium-arsenide semiconductors for solar cells and telecommunications. Notwithstanding its importance, the U.S. has not produced arsenic since 1985. All of the arsenic is imported from China and Morocco. Arsenic can be toxic in large doses,and the mining industry monitors and prevents its release into the environment.

Arsenic is the 20th most abundant component in the Earth’s crust, and is widely distributed in rocks, soils, natural waters, and small amounts in most living things. It is a metalloid, which means that it can behave as a metal or as a nonmetal. Arsenic is rarely found as a pure element, but is a component in sulfur-containing minerals, the most common of which are arsenopyrite and pyrite. Arsenic also can be obtained from copper, gold, and lead smelter flue dust as well as from roasting arsenopyrite. Arsenic has been commercially recovered from realgar and orpiment in China, Peru, and the Philippines, and from copper-gold ores in Chile. 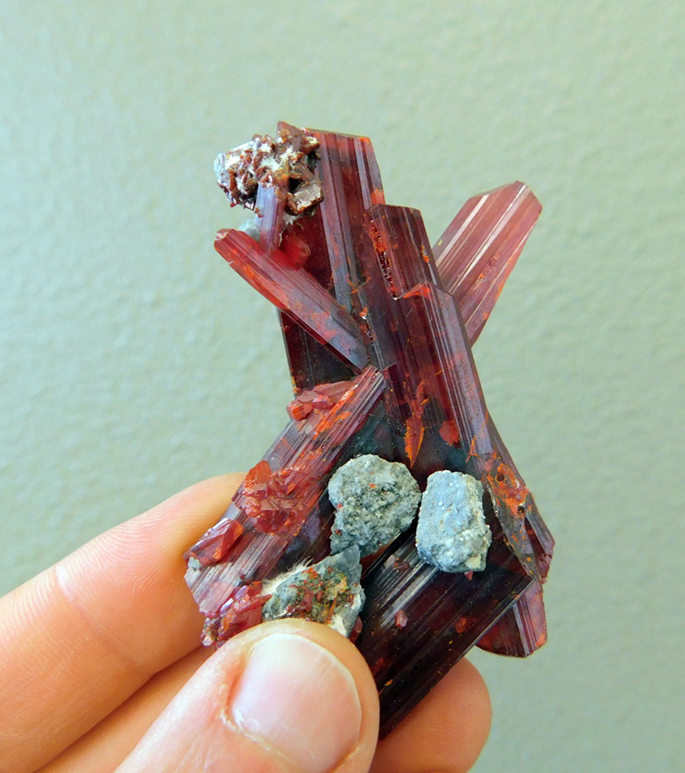 The reported world production of arsenic was 59,000 tons in 2021 Arsenic is used in a variety of applications, as a preservative for pressure treating of lumber; as a strengthening agent in lead-storage batteries; in pesticides and insecticides; as an antifriction additive for bearings, and wheel weights for tires. Another increasingly important use of arsenic is to manufacture gallium-arsenide semiconductors for solar cells and telecommunications.

Inorganic arsenic is classified as a known human carcinogen by the International Agency for Research on Cancer. Consuming a large amount of arsenic over a lifetime can increase the risk of cancer in internal organs such as the bladder, lungs, and liver. Arsenic can lead to cardiovascular disease, hypertension, diabetes and anemia. In areas with naturally high levels of arsenic in groundwater, arsenic poisoning from drinking water is a serious concern.

Arsenic is released into the environment naturally through the weathering, oxidation and erosion of rocks, especially volcanic rocks. An estimated 25% of arsenic emissions into the atmosphere come from natural sources, mostly volcanoes and areas of volcanic rocks can have elevated arsenic levels in the soils and waters derived from them. The majority of the arsenic released by all sources end up in the soils, rivers, and ultimately, the ocean.

Since valuable metals such as copper and gold can be found in arsenic-rich sulfide mineral deposits, mining companies will often look for rocks, soil and water with a naturally high arsenic content as a means of locating an ore body. It is, therefore, important to establish baseline or existing arsenic concentrations in the surrounding environment to determine the impact of mining versus other human contamination (pesticides, fungicides); and natural background levels. The measurement of baseline concentrations is usually part of environmental impact assessment processes practicedin more than 100 countries.

Human activities which intensify the release of arsenic

Human activities have the potential to increase arsenic concentrations in the air, water, and soil. The rate of arsenic release from sulfide minerals can be accelerated by mining activities, which expose the minerals to weathering processes during excavation. Arsenic oxide dust is produced during copper and gold smelting, and coal combustion. The direct application of arsenic in the form of pesticides, fungicides or wood preservatives has historically been a major source of arsenic in soils and adjacent water supplies, as arsenic is strongly attracted to soil particles and sediments. Freshwaters and associated ecosystems may be impacted by arsenic dissolution in runoff from contaminated sites. In contrast, it is the natural release of arsenic from geologic materials that has become a threat to drinking water supplies around the world.

Arsenic in the mining industry

Atmospheric arsenic emissions from copper smelting represent the largest contribution of arsenic from the mining and metals industry and have been the focus of pollution control technologies and increasinglystringent regulations. Arsenic can also be leached out of some metal ores by cyanide or acid rock drainage but can be captured and removed from wastewater prior to release into the environment.

Arsenic is also present in coal used to generate electricity. When coal is burned, ash is produced which contains most of the naturally occurring arsenic. More than 99% of the ash is collected and is either sent to specially- designed ash ponds, disposal sites, or recycled into commercial products. Coal ash is also used as backfill material to support mine reclamation.

Like other industries, mining is strictly regulated and monitored by multiple government agencies at the local, state and federal levels. Regulations adopted by the EPA under the Resource Conservation and Recovery Act and other laws, set standards for protection of human health, wildlife and the environment.

A number of technologies are being used to capture and remove arsenic from smelting stacks and mine tailings. Air pollution can be controlled effectively using scrubbers, electrostatic precipitators, and baghouses in smelters, which are capable of removing up to 99.7% of the dust and fumes produced during roasting and smelting. Mine tailings and wastewater can be treated for arsenic removal using present day technologies, Water filtration systems also exist to protect human health and the environment. The use of plants, wetlands, and iron nanoparticles to remove arsenic from already contaminated areas is also presently being investigated.

The appropriate state of the art and advanced technologies and protocols for monitoring, analyzing, treating and disposing of all types of liquid and solid wastes containing arsenic are available and applied in the mining industry when and where required to ensure the appropriate level of protection for humans and the environment.