It is crucial to re-establish a domestic rare earth elements (REE) production industry to help secure the nation’s clean energy future, reduce the United States’ vulnerability to material shortages related to national defense, and to maintain our global technical and economic competitiveness.

REE are becoming increasingly more important in our technological society and are used in many of our electronic devices and energy sources. The Chinese dominance of the REE market has adversely impacted REE supply stability and endangers the U.S. and its allies’ assured access to these key materials. REE are considered critical minerals, which is defined by U.S. Presidential Executive Order No. 13817 (2017) as “a mineral (1) identified to be a nonfuel mineral or mineral material essential to the economic and national security of the United States, (2) from a supply chain that is vulnerable to disruption, and (3) that serves an essential function in the manufacturing of a product, the absence of which would have substantial consequences for the U.S. economy or national security”. Realization of these objectives requires:

Former President Trump subsequently issued Executive Order 13953 declaring a national emergency to expand domestic mining of such minerals, in part through the use of the Defense Production Act. Citing the U. S. dependence on China for 80% of critical minerals needs and vulnerability in critical supply chains, the President also ordered federal agencies to reduce unnecessary delays in permitting actions. The recent action is designed to more swiftly implement the prior 2017 Executive Order on critical minerals and rare earths. See, 85 FR 62539 (October 5, 2020).

The new Administration under President Joe Biden continues to recognize the need for secure, domestic mineral supply chains. Biden has left the prior Executive Orders in place and further issued EO 14017 on February 24, 2021. See, 86 FR 11849 (March 1, 2021). That new order directs the Secretary of Defense to submit a report identifying risks in the supply chain for critical minerals and other identified strategic materials, including rare earth elements, and policy recommendations to address these risks.

According to the United States Geological Survey’s 26th Annual Mineral Commodity Summaries report issued February 2, U. S. dependence on imported minerals continues to grow. Imports made up more than one-half of U.S. consumption for 46 nonfuel mineral commodities and the United States relied entirely on imports for 17 of those. Of those 17, 14 are identified as critical minerals. Another 14 critical minerals had a net import reliance greater than 50 percent, most of which were supplied to the U. S. by China. See, Mineral Commodity Summaries 2021 at 5-6; https://pubs.usgs.gov/periodicals/mcs2021/mcs2021.pdf

On November 17, 2020, the U.S. Department of Defense announced contracts and agreements with rare-earth-element producers under the authorities of title III of the Defense Production Act. These agreements were put in place to support and strengthen the domestic rare earth supply chain in response to the Presidential Determinations, signed on July 22, 2019, pursuant to section 303 of the Defense Production Act of 1950, as amended (50 U.S.C. §4501 et seq.).

Rare earth elements are a set of 17 chemical elements in the periodic table (Figure 1, Table 1) that, because of their unique geochemical properties, are typically widely dispersed in the Earth’s crust and are not often found in concentrated and economically exploitable forms. This fact requires special recovery and refining techniques to produce useable elements. 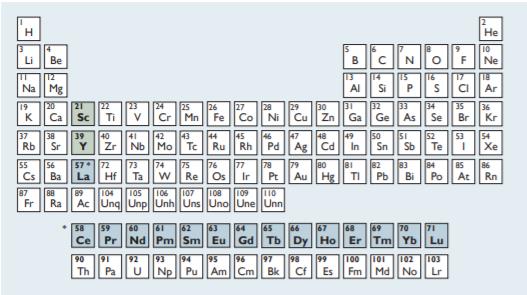 FIGURE 1. The periodic table of the elements with the 15 lanthanide elements shown in gray. Two related elements, scandium and yttrium, are shown in green. Together these are considered the rare earth elements (REE).
Significant quantities of REE are used in the production of clean energy technologies, including advanced automotive propulsion batteries, fuel cells, electric motors, high-efficiency light bulbs, and generators in wind turbines. Most modern defense technologies such as radar and sonar systems, precision-guided weapons, and cruise missiles require REE and the materials produced from them. Rare earth elements are also required for a variety of high tech applications in computing, pollution abatement, power generation, water treatment, oil refining, metal alloying, decolorizing recycled glass, communications, diagnostic health care, flat screen TVs, and hybrid cars. More than 97 percent of all REE for world consumption are produced in China (Long et al., 2010; van Gosen et al., 2017). China’s willingness to export REE continues to decline due to its growing domestic demand and its mandate to consolidate the industry by decreasing its number of mining permits.